This article describes a piece of land in Volax, Tinos. Tinos is a rather arid island in the Mediterranean country of Greece. It receives around 350mm (13.7 inches) of rain per year. The land is heavily eroded due to a variety of factors. In this article we will first describe the history and then share some pictures. We will then end with an overall analysis from our point of view and ask for the input of other professionals in the field of streambed restoration and permaculture earthworks. Using this feedback and our own research we hope to come to the best solutions for repairing the damage, which we will use to make a design that sets this site up for a return to abundance in the long term.

Description and History
The land is shaped like an amphitheater and has a relatively flat valley bottom (detailed picture here). To some degree it is the concentration point of a watershed, where several flows of water converge and have created a floodplain. The area is known for its huge granite boulders that were formed eons ago and through erosion are the only things that stand out. The sandstone around them has eroded away and the granite boulders remain, giving the whole area a very distinct and appealing aesthetic. Historically this floodplain or valley bottom was managed for grain production; the sides of the valley were planted with grapes of the local Tinian variety. The first dirt roads were brought in 30 or 40 years ago, along with the arrival of the pickup truck. Until then ‘donkey tracks’ were the only mode of transport, as is usual in the rocky Greek landscape. So to some degree this landscape is relatively unspoiled as compared to other areas. Also because of the difficulty in moving these huge boulders that can sometimes be the size of a bus. The dirt road that is bordering the land was asphalted in 2001.

Then around 2006, the client bought this piece of land and was advised to do some works to ensure proper drainage. This advice was taken way too far by a local contractor and huge boulders were brought in and used to create a channel that would help channel the water away. Sadly in the winter of 2008 there was a huge rain event and a large part of the soil around the rocks washed away downstream. This rain event was a part of two seemingly high rainfall years of rainfall which reached 670mm! The boulders are very rounded and without support or proper placement have started collapsing. This erosion problem has continued to this day and the pictures speak for themselves.

Below you will find two videos and a series of pictures of this site, to give you an idea of what is going on. I have also created a larger article with a list of possible solutions as well. They range from earthworks to brushbundles and beyond. 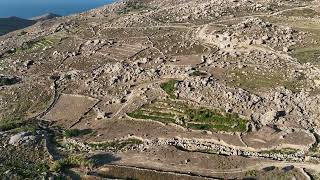 This drone video starts off facing East and finishes with the camera facing North-Northwest. 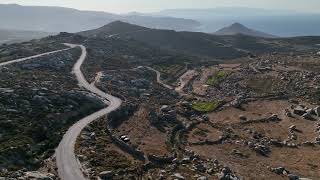 Another drone video flying along the central valley of the property. An overview of the valley.

The valley as it is today, erosion is clear along the banks. The valley as it was in 2012. The channel and bridges are visible, but little erosion. Sharp dropoff as the scarp begins. This pipe is where the runoff water from several hundred meters of road-catchment enters.

The original soil level is visible due to the lack of lichen.

A view upstream from the lowest point of the property. The original channel that was laid using boulders, with the scarp forming on the left. The historic depositions of soil are clearly visible here. Imagine that the field used to extend out towards these boulders!

The analysis and vision
As one can see from the pictures there is several factors at play here. One is the fact that there is more water entering this land than historically was the case. The concrete road was brought in around 2001 and combined with the channel that was created it plays the biggest part in eroding this channel. It also erodes the hillside above the channel after it enters the site from the culvert. Another issue is the constant pressure from free-ranging goats who jump the fence. But perhaps the biggest issue is the constructed channel that is currently collapsing. It would be important that the design reuses these boulders and puts them to good use.

In the long term the aim is to restore the damage and bring the valley into full abundance and to enable the client to live there.

The main functions we are currently designing for:

The next best step:
There are several things we could do, but my proposal for this year would be to do small interventions at the lowest point on the site. I come to this suggestion because of the permaculture principle “Use Small and Slow Solutions”. The boulders that are in the channel are too big to move without bringing in the mega excavators. And though it might be needed to use those in the future, it would be best to start smaller. And to then observe the changes that these small solutions provide. My suggestion is to create one or more Beaver Dam Analog, a kind of human-made beaver dam. These Beaver Dam Analogs are described on this website or can be seen in this video.  The banks would have to be protected using brush-bundles (marked in brown). These BDA’s would consist of dozens of thick beams or poles driven straight down into the soil, with branches of Oleander and Kalamia woven in between them. They would be shaped in a halfmoon shape and be totally level at the top. These BDA’s would allow the water to pass through but at the same time calm it down enough that it can drop out whatever it is carrying. I would expect a buildup of soil behind each BDA and thus a retention of soil on site. It would also allow the remaining vegetation a chance to recover and grab onto that soil.
The area I have in mind is near the fig-covered well. This part of the streambed has the fewest boulders and it seems as though the water is already rather passive here.

Making these BDA’s is a process that a couple of people could do in a few days. The materials would largely be on site already and hand tools would be used for the majority of the work.

How you can help.

We are looking for input on how to proceed. And have therefore reached out to a large number of professionals in this field who would be able to give us input on what could work. We feel we have the ability to execute the work ourselves but want help in the Analysis and Design phase. If you feel you have some wisdom to share on this, please fill out the form below and let us know!